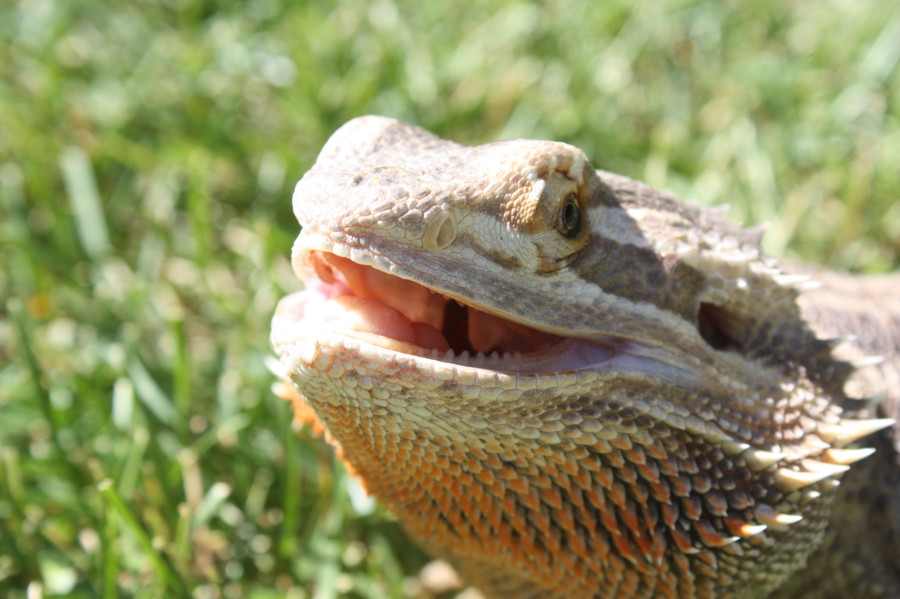 Eyes swirling liquid gold gazed up at me as I dangled the struggling worm into Puff's lair from my tongs. She tilted her conical head in question at my meager offering. Now I was stuck in worm-dangling purgatory until she decided if she felt like eating or not today.

The worm's armored body thrashed against the metal tweezers, twisting itself to and fro. Puff gazed at it indecisively. I couldn't blame her. It didn't look appetizing to me either. Maybe I'd offer her a salad of mixed greens instead.

I began to pull the tweezers out of the tank. Perhaps sensing her last chance, Puff shot her head out at the worm, devouring not only it's black and beige body with two heads and eight legs, but my entire forearm as well. Worm and arm went into Puff's gaping maw and vanished without a trace of blood.

“Well.” I gazed at my arm – not bleeding, just a pink knob of an elbow and nothing else. It'd happened again. I was dreaming.

I knew this, because there was no way that my tiny lizard could ingest something twice the size as her. Also, there was no pain to speak of. There would have had to be pain. Or at least blood. I wondered what my Complete Dream Dictionary would say about this incident. The instructions at the beginning told me not to take each definition at face value. I should decide what each symbol meant to me personally.

A missing arm. Did I feel like I wasn't fulfilling my full capabilities as a human being? Interesting.

My mother and sister entered the room, further complicating the situation. Usually when I realized I was lucid dreaming, I'd just wait it out until the next dream. It wasn't like when other people realize they're dreaming and decide that they should fly – and so they do. I tried it before. I just sank into the ground. The best possible option was just waiting the dream out. And then the one after that. And so and so forth until morning. I continuously woke up feeling exhausted.

“What? What's happened? Sydney. Get the phone,” Lucid-Dream-Mom said. “We need to call an ambulance.”

“Seriously, don't bother over it. It's best just to wait it out.”

Sydney gazed at me wide eyed like I was on death's doorstep, hesitating between taking my word for it and running for the phone. I felt sorry for Lucid-Dream-Sister.

“We are not waiting it out. Sydney, get the phone.” My mother glowered at both of us.

“Don't. Neither one of you are even real. This is all in my head.”

I shouldn't have said this. Not to the only woman on earth who could debate with me until it rained poodles. At this rate, I'd never get to the next dream. I'd never wake up.

“How do you know this is all in your head? What if you're the one who's not real? What if we're the ones dreaming?”

“You don't know that. You have no way of knowing that.”

“You were not doing the laundry,” I said. “The real you is asleep dreaming about something completely different.”

“What's going to happen to us when you wake up?” My sister fretted.

“You'll cease to exist. It'll be okay. You're not actually alive anyway.”

“Nichole. Don't talk to your sister like that. This isn't funny,” Mum said.

Sydney began to cry about not wanting to die even though she was a dream. It was endearing. I vowed to remember this to tell Real-Sydney later.

I noticed my walls were white instead of light pastel yellow.  My brain had made a mistake.  I pointed this out to my Dream-Family. They didn't find it as amusing as I did. Mum was standing with her arms crossed, obviously searching for another defense to my ridiculous seeming argument.

“If I wasn't alive, I wouldn't be bound by the rules of gravity. Or physics. Or anything.” My mother reasoned. “I could walk through this wall if I wanted to.” She pounded on the solid wall. “Well, I can't. Are you ready to go to the emergency room now?”

“If you were the real-you, you would have called the ambulance already,” I countered. “You wouldn't bother arguing about something as insane as this.”

Sydney wiped tears from her cheeks. “If we hold hands, can I come with you into the next dream?”

“There is no next dream!” Mum yelled, exasperated.

“We could try,” I told Dream-Sister. “I don't know if it will work though.”

“Don't leave me here to stop existing,” she whispered. “That's so sad.”

I reached for her hand with the arm that I still had. Before we could grab onto one another, I was gone.